February 14th, a day when all stop what they are doing, and show their love towards others.  A romantic day with cards, roses, candy, cupids and kisses. So many people celebrate this loving holiday without the knowledge of its history. Who is that fat angelical baby shooting people with arrows? Who is St. Valentine and why do we celebrate a holiday dedicated to him? Lets take a trip back in time to find the answers.

It all started in Rome, with a Fertility Festival called Lupercalia, named after a pagan deity, Lupercus. This Festival (or feast) was celebrated on February 14th-15th. At that time, Rome had an enormous population of wolves. Lupercus was known to guard the shepherds and their flocks. So the Romans dedicated a feast to Lupercus, (pictured right) called Lupercalia.
In the beginning of each Festival of Lupercalia a group of Roman Priests called Luperci would gather in a cave, where supposedly Romulus and Remus (the founders of Rome) were born and cared for by a 'she-wolf' (also known as a lupa). In this cave the group of Roman Priests would do sacrifices; a goat, for fertility and a dog for purification. The goat's skin was cut  into strip-like pieces, they would then dip these slices of skin into sacrificial blood. After that process was taken place, men would run through the streets and into homes gently slapping the bloody skin on women and crops. However, the women were not frightened of becoming slapped with bloody goat skin, they greeted the men. It was a well known superstition that the women and crops that were slapped would be more fertile within the next year.
The children were involved in this feast as well. In honor of the female pagan deity, Juno Februata, (Pictured, left) the young girls would write their names on a piece of paper. All the names would be placed into a large box or urn. The names would be drawn from this box or urn and the boys and girls would be paired up for the whole year, gifts would be exchanged and such. Most of the time these paired children would end up marrying each other. This Feast of Lupercalia was so popular that it was celebrated even long after Rome had its problem with wolves.
After years of this feast Emperor Claudius II came to conclusion that single men made better soldiers without wives and families. He banned marriages for young men. A priest named St. Valentine disagreed with this action, and began marrying young men and women in secret. St. Valentine thought there was nothing wrong with the pagan practices of the Feast of Lupercalia; sacrifices to pagan deities (Lupercus, Juno, Hera and Pan), worshiping false deities, and superstition. Well he's no Christian then is he? Truly if he was he would have thought there was nothing wrong with banning this pagan practice.  St. Valentine was caught and thrown into prison for his secret practice, no one knows exactly what happened to him after that. Then in 498 A.D. February 14th, Pope Gelasius official ended this feast, saying it was unchristian he outlawed it all together. 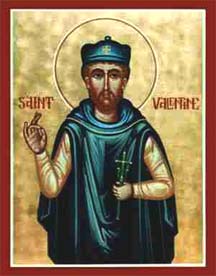 A Catholic picture of St. Valentine.
Notice the pagan halo behind his head.

As the same with every Christian holiday today; Christmas, Easter, St. Patrick's Day, ect, pagan feasts dedicated to pagan deities have been abominably Christianized to satisfy the people. The Roman Catholic Priests gathered together and renamed this feast of Lupercalia to St. Valentine's Day. They changed this Valentine character into a Christian, saying he healed the blind, cured the sick, helped Christians flee from Roman punishment, and was thrown into prison for doing so. The Priests also managed to change the practice dedicated to Februata Juno (picking girls' names from an urn) into picking Saint's names from a box, which ever Saint is picked from the box that child has to emulate that Saint's life. (this practice is still being done today in Catholic Schools called conformation).

Cupid (in Latin Cupido) is the false deity of of erotic/pornographic love. Cupid has many names; Eros, Amor, and Kama. There are mythological sides to the figure cupid;  the son of Jupiter (Zeus) and Venus, a lively boy who delights in pranks and spreading love, the other side son of Nyx and Erebus, which is known for riotous debauchery (sex and drugs).

One must ask... "Is this holiday appropriate for believers in Yahushua Ha Mashiach? Would we celebrate these pagan rituals in our Father's Kingdom? Does YHWH approve of this?" Yirmeyahu (Jeremiah) 10:2 "Thus Said YHWH, "Do not learn the way of the gentiles/pagans/heathens"

Not only does YHWH want us to NOT learn these ways he doesn't want us to practice them. Sacrifices to pagan deities, using the blood to make the women fertile, (only YHWH can make a women fertile, not a goat or dog's blood), honoring Juno. It's not appropriate or approved by YHWH, even if you are only celebrating it in the sake of Love. We should show our love towards others everyday. Why wait a whole year to show your love in some pagan ritual?

Now that you know the truth to this pagan man-made holiday, will you continue to celebrate it? Or will you renounce it an tell your friends the evil of it? The choice is yours, and yours alone; not your mom or dad, your brother or your sister, no, it's not your grandpa or your grandma's choice either. Romans 14:12, "Each one of us, therefore, shall give account of himself to Elohim." You, now knowing the truth must make a decision, keep quiet and be held accountable for not sharing the truth; or tell everyone you know the truth of St. Valentine's Day. What will you do?